The evidence shows that access to high-performing schools in England is unfair. The system prioritises pupils whose families can afford to live near enough to those schools to be admitted. The evidence that I and others have accumulated on this over the last five years suggests we need to try a different way of deciding which pupils get into the most popular schools. We have written about this here, here  and here. For some years I have proposed a ‘marginal lottery’ – reserving some places at each school for pupils further away from the school, see here and here.

While the education system in England is unfair, it is worth asking how it compares to other similar countries. The latest PISA report, released a week ago, focuses on Equity in Education: whether an education system provides in their words “equal learning opportunities to all students”. The responses to the report from England that I have seen have been few, and typically negative. Commentators have focussed on low levels of emotional wellbeing in England relative to other countries: for example here, here and here. This is undoubtedly important.

The core issue of the report is equity in education. The results are central to the report, in the first table in fact, Table 1.1. How should we judge the equity of an education system? Not the equity of a country as a whole, but specifically the education system. One way is to gauge the extent to which your family background determines your educational outcome. If background is everything and there is very little chance to do well if you start out poor, then we would say equity is very low. If background matters little and anyone can excel, then equity is high.

PISA has data on the cognitive achievement of fifteen year-olds around the world. It has a lot of data on family background which it uses to create a composite measure of each student’s socio-economic status, what PISA calls an index of economic, social and cultural status. 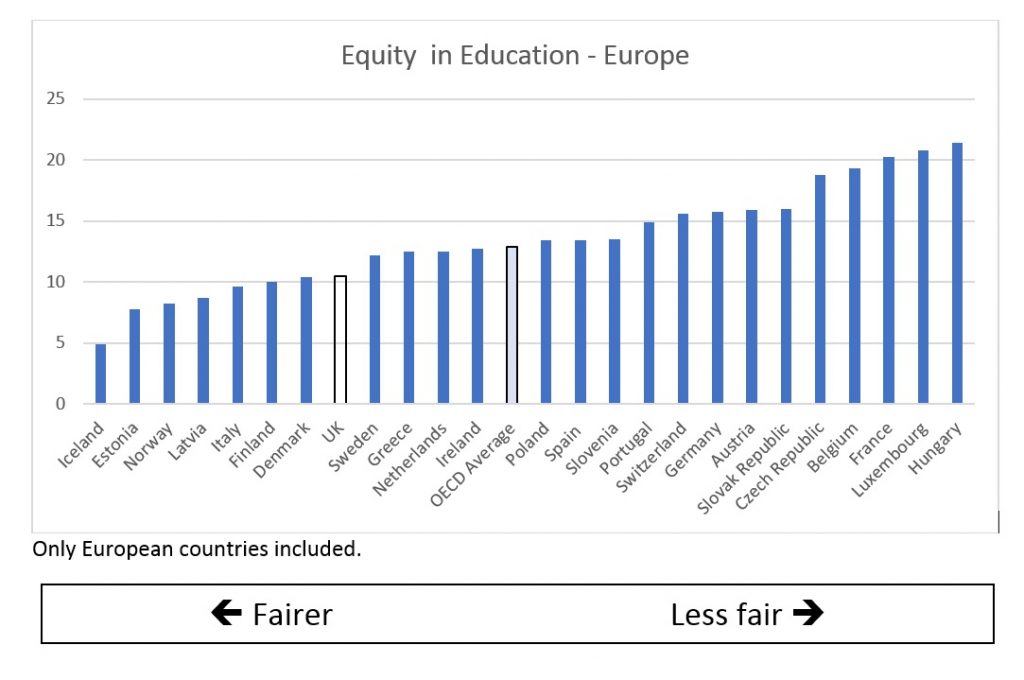 Picking out a few of these: the less equitable list includes France (among the least equitable of all OECD systems), Switzerland, Germany, and the Netherlands.

Some of these should not be a surprise. Those of us who are against selection in schools (and that’s most of us, right?) believe it increases inequality and reduces social mobility. It should not be surprising when systems with early selection – like Germany – have much lower equity. Further results in the report (also in Table 1.1) show that the equity measure in the UK hasn’t changed much from the last PISA Science-focussed programme in 2006. The implication of that is that the UK would have stood out even more strongly in 2006 as fairer than most, and therefore that the policies that have generated this outcome were already in place in the early 2000s.

Why is this, what causes these differences? Clearly, we cannot ascribe a single cause to this system-level outcome, and no doubt someone is doing the proper analysis right now. My own speculations would include some of the progressive policies worth defending in the school system in England: very little grammar school selection; no tight rules on simple “go to your local school”; strong school accountability rules (that have the greatest effect on schools serving low income neighbourhoods); and strongly unbalanced school funding giving more support to the more disadvantaged schools.

Nevertheless, we and other countries can learn something from this international perspective on our education system. The absence of grammar schools, strong school accountability and differential pupil funding may have played their role in generating a fairer education system here than in many of our neighbours in Europe.